Today I have the pleasure of interviewing (once again) my dear friend and member of my crazy writer's group: Mercedes M. Yardley.

First of all, let me say a hearty congratulations to you! Your first collection, Beautiful Sorrows, just came out from Shock Totem Publications and I have to say that the title describes the contents perfectly.

Which leads me to my first question...


Mercedes, you’ve really perfected the art of beautiful sorrow, or as you once put it to me “whimsical horror”. How did you develop your unique “ethereal, yet horrific” voice?

It was a lot of trial and error. You’ve read some of my old pieces, and you can see tiny slivers of this voice emerging, but it really wasn’t until I wrote the novel my agent is currently shopping that I felt it come out in full force.  My writing was always a touch dark, but also fairly pretty.  That’s how I’d explain it.  Prettily horrific.

When did you first have the inkling that other people might want to read your work?
I wrote a lot as a kid, and my third grade teacher asked me to read some of my stories aloud to the class.  It was scary, but cool, and it just seemed like the thing to do, you know?  Write something and share it. Then I was in a couple of great magazines and anthologies, and I figured that people were buying them because of the other authors in there. I was just along for the ride, and loving every minute of it.  But now that Beautiful Sorrows has come out, I’m just floored that people are buying it. I mean, it’s my book, a book of just me, and people are still choosing to spend their money on it.  It’s extremely humbling, but so delightful! I’m so excited.

What was the tipping point for you to stop just “dabbling” as a writer and start submitting things for publication?

I was quite literally going mad. We had just moved to Las Vegas, my husband was gone all of the time with a new job, and I had a baby boy at home.  It was too hot to go outside and we were trapped inside of the apartment. I thought, “This isn’t the life that I want for myself!”  I was so lonely and so desperate for a creative outlet.  I joined up with the local NaNoWriMo group, wrote my first novel, and loved it. It was daunting to start submitting short stories and poems to magazines, but that was my next step.  I always wanted to be a writer, but I lacked the motivation and confidence.  I was intimidated.  But I grit my teeth and started forward.

You’re in a writers’ group with me. Admit it.
No comment, lest I incriminate myself.

Our writer’s group is pretty hardcore, but I can’t tell you how much I’ve grown as a writer because of being in a group with you, Mercedes. I think we’re awesome! Have all of your writers’ group experiences been as awesome?

The Illiterati is unique because we like each other, in and outside of the group as well.  We’re all creative, we have a great work ethic, and especially in the case of you and I, we spur each other on with friendly but gritty competition.

That reminds me. Congratulations on beating my measly 4th place in the Las Vegas Valley Flash Fiction contest! I owe you a video extolling your virtues.

That’s right, I won 1st place! I’m looking forward to that video. Bwahaha! And thank you for spurring me to write with excellence. I ascribe my win to our Illiterati power. But what works for us might not work for everyone. Would you recommend finding a writers’ group to others, and do you have any tips for finding the right one?

I think everybody needs some type of group. Even if it’s a loose collection of betas who only read your stuff once.  In our case, we’re an uber-intensive, three hours a week writer’s group where we tear each other’s work to shreds. But that’s because we respect each other and we’ve earned that respect.

I’d say that if you don’t jive with a person, you’re not going to respect what they have to say about your work. And if you don’t value their opinion, they shouldn’t be looking at your work anyway.  It’s just a waste of everybody’s time.  And time is such a precious commodity.

Ok, random question: I hear you had something to do with the sinking of the Titanic.

Let’s just say that [James Cameron’s TITANIC] movie portrayal of [First Officer] William McMaster Murdoch as a money-grubbing murderer has been contested by friends and family.  Apparently somebody involved with the movie ending up paying the family for defamation of character, or whatnot.

Let me also add that Murdock Luck is a real thing.  You definitely don’t want to stand next to me in a lightning storm.

What energizes you as a writer?

Goals.  Making strides. The success of another writer that I enjoy. Illiterati meetings.  I love the rush of moving forward, even when it’s difficult. But then, it seems that it’s always difficult.  One or another of us is always slogging through the literary mud.  It helps to hold hands and run together.

What would you like to see more or less of in fiction?

I’m done with zombies. Totally done. I’d like to see more ghost stories, but that’s because I love them so much.  Ooh, and more voodoo stories!  You can’t have enough ghost and voodoo stories.

Thank you Mercedes for stopping by my little corner of the universe. Any parting shots?

You may have won this contest round, but I’ll get you next time, Gadget! Can’t wait to see you on Tuesday to shoot the literary breeze.  I’m sure we’ll go head to head on something, as usual. 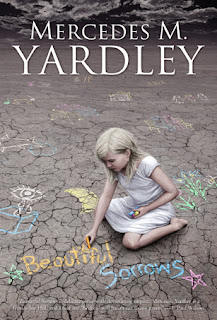 Make sure you pick up a copy of BEAUTIFUL SORROWS from Shock Totem or Amazon.com
Posted by Mason Ian Bundschuh at 12:00 AM