Next up in Mason’s Book Picks: Ender’s Game – Orson Scott Card
Another book I was only recently introduced to by my awesome wife (who has great taste in books)

This is the kind of sci-fi I want to read. It's thoughtful, emotionally piercing, and generally amazing for the sense of inexorable doom which hangs over the (incredibly sympathetic) protagonist.

Ender’s Game avoids so many pitfalls of sci-fi by being simply a great story. 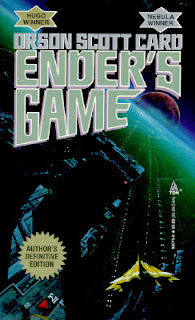 You won't find all that sciency-science, nor is it weighted with cartoony characters (such as the dreaded "buxom-amazon-who-wears-revealing-clothes-while-kicking-butt-and-is-essentially-a-masculine-character-with-boobs-because-the-author-doesn't-understand-women") which sometimes rear their heads in sci-fi. (come on, we've all read our share of chauvinist novels.)

It is a masterfully written work. Go buy it peoples. Go buy it.

Posted by Mason Ian Bundschuh at 10:00 AM No comments: